Thank you all for visiting, reading and sharing the news with me on the Fukushima Appeal Blog. I’ve kept it running since February 2012. Unfortunately, I will need some break now to attend to some of my health issues.

I would like to thank this blog and its supporters for giving me an opportunity to become a part of the slowly awakening global community during this very important time of global change. I had zero knowledge of nuclear before the Fukushima disaster, and was and still am a just normal citizen. It’s been hard to see Japan becoming a criminal, immoral and authoritarian country since the Fukushima Disaster. So it’s been a huge awakening and healing process to have a platform to speak out instead of feeling powerless, angry and sad about it. With the new secret law that is going to be introduced in Japan soon, Japanese people will need more help than at any other time in its history from foreign bloggers, doctors and scientists. Please remember Fukushima. I hope that the more difficulties we may encounter, the stronger and connected we will become to fight against injustice and be able to act from our heart space. (Mia)

“I hope that every child in Japan is given comprehensive thyroid blood testing including at the minimum TSH, Free T4, Free T3 and thyroid antibodies. Their thyroid function should be regularly tested on an ongoing basis. “ By Dana Trentini http://fukushimaappeal.blogspot.co.uk/2013/11/thyroid-testing-for-japanese-children.html

*Frightening Report from the UNSCEAR (The United nations Scientific Committee on the Effects of Atomic Radiation ＵＮSCEAR-国連科学委員会による、恐るべき報告。http://fukushimaappeal.blogspot.co.uk/2013/05/frightening-report-from-unsear-united.html

*A letter to all young athletes who dream of coming to Tokyo in 2020 東京オリンピックを目指している若い選手の方々へ Some Facts You Should Know About Fukushima 0.086Bq/kg was normal amount of ionizing radiation in fish before the Fukushima accident. Now it is 100Bq/kg 1160times more radioactive. http://fukushimaappeal.blogspot.co.uk/2013/10/a-letter-to-all-young-athletes-who.html

*Tokyo radiation is worse than Gomel - Mika Noro’s speech on the impact of radiation in Japan http://fukushimaappeal.blogspot.co.uk/2013/07/tokyo-radiation-is-worse-than-gomel.html

*Police arrest animal rescuers inside Fukushima evacuation zone — “They cannot be contacted and are being charged with crimes” http://fukushimaappeal.blogspot.co.uk/2013/02/police-arrest-animal-rescuers-inside.html

… As one does not train with weight that is too light,….. And as I write this, I realize something for the first time: the more I embrace the resistance, the more I am becoming it. http://ianthomasash.blogspot.jp/2013/11/resistance.html

*Fukushima Farmers negotiate with Japanese Government/Tepco 福島農家の若者、政府と東電に対して勇気ある発言 http://fukushimaappeal.blogspot.co.uk/2013/09/fukushima-farmers-negotiate-with.html The current government limit is 100Bq/kg... 0.1Bq/kg for cesium in rice before the Fukushima disaster. … We feel guilty about growing it and selling it...

*Atomic bombs survivors received fair compensation, not so in Fukushima!

The Japanese government’s recent proposal of the “Designated Secrets Bill”, under which journalists could face arrest and prosecution for divulging state secrets, has been cause for much concern among many of my colleagues.

In response to the bill, which is now under consideration by the Japanese Diet, the Foreign Correspondent’s Club of Japan (FCCJ) president Lucy Birmingham wrote a statement of protest:
It is at the very heart of investigative journalism in open societies to uncover secrets and to inform the people about the activities of government. Such journalism is not a crime, but rather a crucial part of the checks and balances that go hand in hand with democracy.

The "Designated Secrets Bill" specifically warns journalists that they must not engage in "inappropriate methods" in conducting investigations of government policy. This appears to be a direct threat aimed at the media profession and is unacceptably open to wide interpretations in individual cases. Such vague language could be, in effect, a license for government officials to prosecute journalists almost as they please.

The full protest statement can be found here: ENGLISH/日本語

Yesterday, I attended a press conference at the FCCJ during which several prominent politicians voiced their opposition to the proposed “Designated Secrets Bill”  (press release HERE). 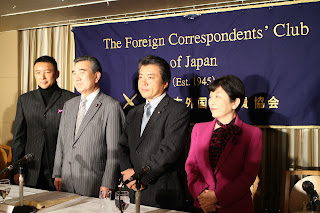 When Social Democratic Party member Mizuho Fukushima asked lawmakers in the ruling party to explain the definition of “secret”, the reply she received alarmed her.  “What is considered secret,” she was told, “is secret”.

“But information,” Fukushima insisted to the crowd of journalists attending the press conference, “is the currency of democracy.”

Mr Sohei Nihi, of the Japanese Communist Party, expressed his concern that people could be arrested and prosecuted for revealing something they did not realize was considered a state secret.  He suggested that with such vague wording in the bill regarding what is considered a secret, the government could use it to control information it deemed to be unflattering.

When expressing his concern about the bill, Mr. Ryo Shuhama of the People’s Life Party suggested that if the government yields too much discretionary power then there is the danger that human rights may be violated.

However, it was perhaps the youngest and newest politician in attendance, Independent lawmaker Taro Yamamoto, whose words were most anticipated.
Yamamoto wondered why a bill such as this is even necessary when information that the public has a right to know is already being tightly controlled.  As an example, he explained that he recently discovered that equivalent of nearly 2.5 million USD of public money that had been earmarked for reconstruction efforts after the March 11, 2011, disaster was used for “exploratory research” into how to promote the sale of Japan’s nuclear technology to Vietnam.  In the public’s interest, Yamamoto requested the relevant papers which he brought to the press conference.  The files were redacted to the point that they were nearly entirely black (PHOTO below).
“Why is the government insisting on expanding its power to crack down?” he asked.  “On the surface, they are saying this is about national security (relating to tensions in Asia), but in reality this is going to lead to the oppression of rights and the freedom of expression.”

Almost seeming to directly address the camera crews from all the major networks that were filming the press conference, Yamamoto expressed his disbelief at the lack of media coverage the proposed bill has received despite his traveling up and down the country from Hokkaido to Okinawa to speak out against it.  “By not providing coverage of this bill,” Yamamoto said, “the media is putting a noose around its own neck.”
“(The passing of this bill) will lead to the ability for the government to crackdown on anything”, Yamamoto predicted.  “We are on a path to recreating a fascist state.”

In Fukushima there was 2 million population including 360,000 children.

Amount of allowable ionizing radiation in food including rice in Japan is now 100BQ/kg for cesium.

So this could mean that contaminated food which they can’t sell in Japan could be exported to the countries that have more relaxed regulations, such as EU countries and Thai (500) and Singapore, Hong Kong, Philippine, Vietnam, Malaysia (1000) and USA (1200).

How you can help with the Fukushima Appeal

*A Woman Who Refuses to Give In to A New Nuke PlantPlease send her a postcard: Atsuko Ogasawara, owner of “Asako House”, built in the center of the planned Ohma Nuclear Power Plant premises. She would appreciate it if you could send a post card (just with a few words is ok). Receiving a mail as much as possible helps her position to keep up anti nuclear campaign. Here is “Asako House”’s address: Ms. Atsuko Ogasawara, c/o Asako House, 396 Aza Ko-okoppe, Oh-aza Ohma, Ohma Machi, Shimokita Gun, Aomori

LINKS to films/videos and information

Fukushima disaster is not over. It seems getting worse. Continuous leaking of ionizing radiation into the atmosphere (10million Bq/hour or more) and into the sea.. There seems no end and no solution to stop it. There is no good result in decontamination work. 27 children developed thyroid cancer. More reports of deformed babies. More people of dying of leukemia and sudden death.… Yet the Japanese Government wants all evacuees to go back to their home land by 2020. Even trying to sell nuclear to other countries, claiming it’s going to be safe. I hope information from this blog to give you views from the victim’s side of stories, health issues and related information on nuclear disaster, especially about Fukushima disaster. We should remember and learn lessons from ongoing tragedy happening in Chernobyl and Fukushima.

*Melting down started after big earthquake before Tsunami, A false statement of "Cool Shutdown" for information see http://www.youtube.com/watch?v=RT7KTT0w9h8

*IAEA ＆ WHO downplays the danger of radiation. (Refer to the comment on Feb.2012)

The Fukushima disaster is far from over, with 10million BQ every hour of ionizing radiation (80% is coming out of reactor 2) leaking continuously into the air (as of October, 2012). No human can get near to the reactors. Even robot can only stay a couple of hours. Reactor 4 is still the most worrying, with 1535 spent fuel rods in the pool. A further 6, 375 spent fuel rods are stored in a shared pool only 50 meters away from the Reactor 4. After the disaster, the maximum allowable dose of ionized radiation was raised to 250mSv/yfrom 100 mSv/y for Tepco workers (3000 workers every day) until the situation is restored to normal. Because of the dangerously high level of ionized radiation at the site, they can only work for a limited time, which makes progress slow, and more and more workers have been exposed to the maximum radiation, which means that it could be difficult to find enough people to work there continuously during the next at least 40 years work of decommissioning.

Nobody knows how and when we will be able to say that the Fukushima disaster is over.